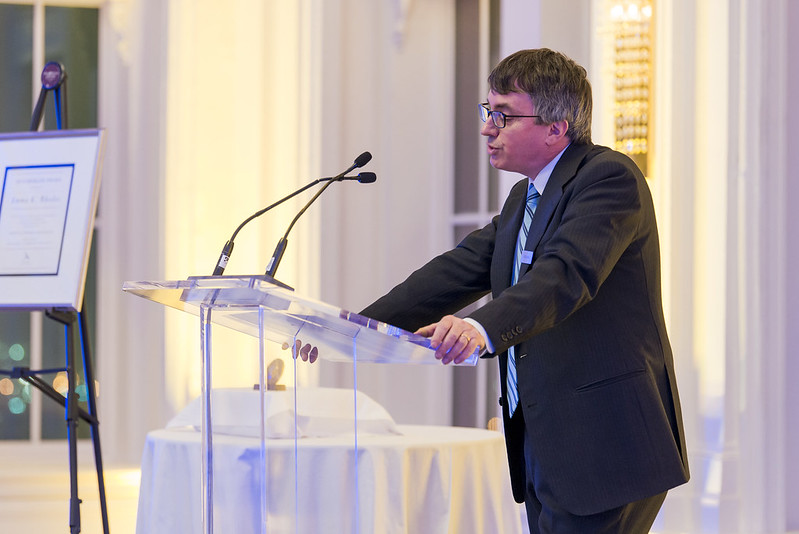 On the evening of Wednesday, February 27, top Toronto lawyers gathered inside the Omni King Edward Hotel’s 17th-floor Crystal Ballroom for the 19th Annual Toronto Lawyers Association Awards Gala. Despite snow lining city streets outside, the turnout — and buzz — was electric. At the start of the night, guests networked and mingled over wine and hors d’oeuvres. Then, at 7 p.m., they took their seats for the awards presentation.

First, criminal-defence lawyer Emma Rhodes received the Honsberger Award in recognition of her work with children and youth in underserved communities in Toronto.

“My favourite part of my job is when I meet a client for the first time,” said Rhodes. “I explain to them that I work for them — not their parents or the police or Children’s Aid Society. I work for them. I am the adult in their life who won’t tell them what to do. I will do what they tell me to do. The reaction is almost universal: their face and body relax and they half-smile. I get a kick out of it every time.” Rhodes went on to thank her seven-year-old daughter, Kate, who was also present during the event.

Then came the big prize of the night. Justice Rosalie Abella of the Supreme Court of Canada took the stage to accept the Award of Distinction for her outstanding contributions to the legal profession throughout her career.

“It’s pretty fabulous to be receiving an award on the same week as the Academy Awards,” she joked.

Her remarks then turned to how much she learned in the first decade of her career. “When I graduated from law school in 1970 and started practising law, I did not know that women suffered any particular disadvantage at the hands of their communities or laws,” she began. “Then I had clients. And from exposure to their realities, I learned that in the early 70s you could lose your children if a judge didn’t like the way you were raising them. I learned that if you went to work or if you stayed home, someone was going to tell you it wasn’t what a woman was supposed to do.”

The crowd cheered. Abella ended with a special thanks to her husband, who, she said, supported her from the beginning.

To find out more about the Toronto Lawyers Association, please visit the TLA website.