“If you have been as fortunate as I have, to have found what you believe to be the recipe for fulfillment, live vigorously,” said Brian Greenspan in a heartfelt acceptance speech 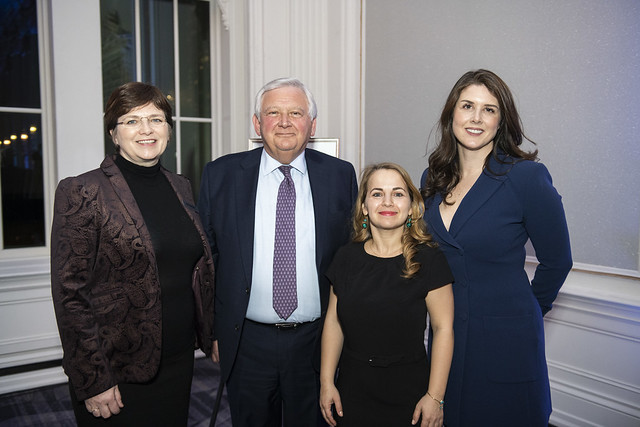 The biggest players in Toronto’s legal community gathered in the crystal ballroom of the Omni King Edward Hotel earlier this month for the 20th Toronto Lawyers Association Awards Gala.

This year, three lawyers received awards for their contributions to the profession. Brian Greenspan, the renowned criminal defence lawyer and senior partner at Greenspan Humphrey Weinstein, received the TLA Award of Distinction. Gillian Hnatiw, the principal of Gillian Hnatiw & Co., received the TLA Honsberger Award. And Ceyda Turan, founder of the Turan Law Office, received the TLA Emerging Excellence Award for lawyers who have been practising for less than 10 years.

In his speech, Greenspan said it was “overwhelmingly gratifying” to receive such an award from his peers. “But at the same time, the notion of lifetime achievement creates a sense of unease, if not grave concern,” he joked. “Did your executive have a private discussion with my family physician?”

He said that, having rejected other speech topics as too academic (the decline of oral advocacy), political (judicial independence) or a lost cause (legal aid), he decided to be “a cheerleader at a lawyer’s pep rally.”

“Art Buchwald, the great American humorist, in a caustic address to a group of lawyers, observed that the legal profession is an honourable calling,” said Greenspan. “Some defend poor helpless insurance companies who are constantly being sued by greedy, vicious widows and orphans trying to collect on their policies. Others of us work tirelessly to protect frightened and beleaguered old companies from being attacked by depraved consumer groups.”

But Greenspan said he has a more romantic view of the profession. “The concept of being called to the bar conveys a sense of mission, a dedication to the public good and principle,” he said.

He advised lawyers to approach their work with passion and purpose. “Nelson Mandela observed that there is no passion to be found in playing small and settling for a life that is less than the one you are capable of living,” he said. “If you have been as fortunate as I have, to have found what you believe to be the recipe for fulfillment, live vigorously. Play it hard. Exhaust yourself.”

Gillian Hnatiw, meanwhile, gave a politically charged speech about women in law and broader society. “There is something unsettling in the zeitgeist right now that makes it a challenging time to be a woman in public life, never mind an outspoken feminist working at the boundaries of the law,” she said. “Law firms are still expecting women lawyers to outwork and outperform their male colleagues in order to advance. The recent trend in encouraging women to lean into their careers, in my view, just reinforces this dichotomy.”

Hnatiw, who has spent 18 years representing survivors of sexual assault, noted that the legal system has made incremental progress on gender issues. The two-year limitation period on sexual-assault claims was relaxed and then eliminated entirely, and damage awards, she said, “now regularly exceed seven figures.”

Ceyda Turan thanked her friends, family and members of the Williams Treaties First Nations in attendance, who she represented as co-counsel in a case that resulted in a historic settlement of $1.11 billion from the Canadian government. “Thank you for your trust in me, for giving me a chance to serve your communities and for inspiring me with your perseverance,” she said.

To find out more about the Toronto Lawyers Association, visit the organization’s website.