“As women, we need to be ambitious, and we should not be shy about being so,” said Supreme Court Justice Suzanne Côté at the event 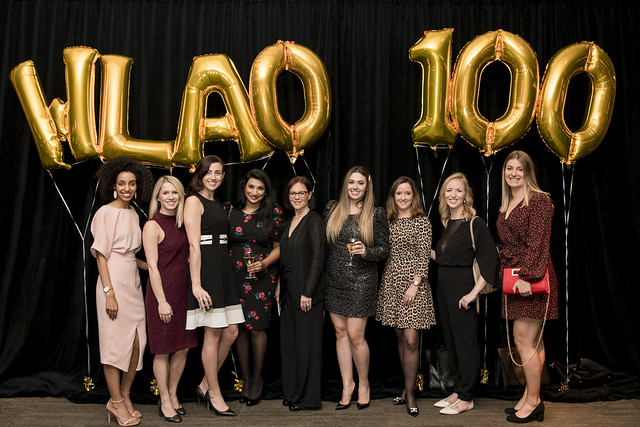 What: The Women’s Law Association of Ontario 100th Anniversary Gala
Where: The Carlu, 444 Yonge Street
When: Wednesday, October 30, 2019

The expansive dining hall at The Carlu bubbled with energy as more than 300 decked-out lawyers and friends came together to celebrate the 100th anniversary of the Women’s Law Association of Ontario.

Kathryn Hendrikx, a board member and former president of the Women’s Law Association of Ontario (WLAO), walked the audience through the history of the association. Founded in 1919, the WLAO advocates for issues affecting women in law and runs networking events for members.

Hendrikx spoke to the audience about the history of women in the legal profession. In 1897, Clara Brett Martin became the first lawyer in Ontario. By the 1920s, more women started to hit the scene, and, over the following decade, the Government of Ontario hired its first female lawyers. In the ’40s the large firms opened their doors to women, and the ’60s saw Mabel Van Camp become Canada’s first woman to be appointed to the Supreme Court of Ontario.

“The ’80s reflected the mood of female empowerment,” said Hendrikx, as images from the association’s history flashed on a screen behind her. “No longer ‘lady lawyers,’ we had come of age in the ’60s and ’70s through the feminist wave. No more garden parties and finger sandwiches for us.”

Two Supreme Court Justices, Andromache Karakatsanis and Suzanne Côté, spoke at the event. Justice Karakatsanis spoke first, saying that since June 2015, more women than men have been appointed to the bench, and that the four women justices of the Supreme Court wield huge influence. “As Bertha Wilson would say, four down, five to go,” she said.

Justice Côté reflected on her trailblazing career and offered advice to women in the audience. “As women, we need to be ambitious, and we should not be shy about being so,” she said. “Women are often too quick to short-sell themselves. We need to take ownership of our successes, as this association is doing tonight, and reach for the next ones.”

To find out more about the Women’s Law Association of Ontario, visit their website.